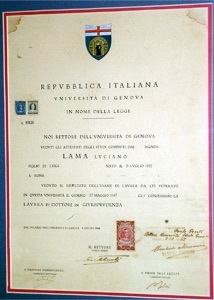 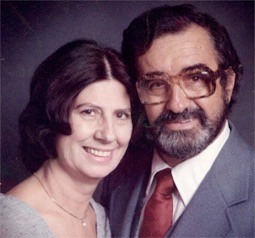 
A FAMILY TRADITION: In 1948, his pen-pal from Ithaca, NY, Gloria Salino, bought a round-trip airline ticket to Rome to meet him. After a whirlwind romance, the two were married, and after six months, she convinced the young attorney that it would be best for the two to go to the U.S. to raise a family because of the state of war-torn Italy. They sold the return airfare, and with the money, bought two tickets on the ship Nea Helen for the voyage from Italy to New York City.Luciano worked days at Morse Chain, nights as a waiter at the Clinton House Restaurant, and attended Cornell Law School.He became a consultant to Metropolitan Life Insurance Company, and in 1960 founded the L.A. Lama Insurance Agency, serving Central New York until 2005. The L. A. Lama Insurance Agency is now part of First Niagara Risk Management.Luciano A. Lama’s love and respect for the law was the inspiration for the founding of the LAMA LAW FIRM, LLP in 1995.

The Law Firm is family owned and operated by father and son partners, Nino Lama and Ciano Lama (see about us), committed to the premise that the client’s interests come first and foremost in every aspect of the practice.

The firm follows the wisdom of the family patriarch and adheres to the principles of integrity, forthrightness, courtesy, zealous client advocacy, and care that have allowed the Lama family the honor of serving the community since 1948.

Luciano A. Lama
received his Doctorate of Jurisprudence law degree from the University of Genoa, Italy in 1946. He practiced law in Rome, Italy.

We will respond to your inquiry in a timely fashion. Thank you.